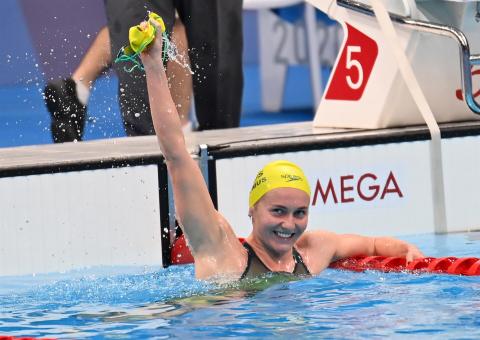 Australia's Ariarne Titmus won a thrilling 400m freestyle duel with American great Katie Ledecky in the Olympic pool on July 26 as Caeleb Dressel launched his bid for a seven-gold spree in style.

The Tokyo Aquatics Centre also witnessed a dominant 100m breaststroke swim by world record holder Adam Peaty, who defended his title to give Britain its first gold medal of the Games.

Elsewhere on the third day of action in Tokyo, Norway's Kristian Blummenfelt won the men's triathlon in a race marred by a bizarre false start.

British diver Tom Daley shed tears of joy after winning his first Olympic gold in his fourth Games when he and partner Matty Lee edged out hot favourites China in the men's synchronised 10m platform event.

Ledecky came to Japan on the back of winning four gold medals and a silver at Rio in 2016, but Titmus has been snapping at her heels, ousting her as world champion in 2019 and topping the timesheets this season.

Titmus inched clear over the final 50m to touch in 3min 56.69sec after an absorbing encounter. Only world record holder Ledecky has ever gone quicker.

"I tried to stay as composed as I could and use the speed that I have," said the Australian, whose win was celebrated wildly by her coach, who ripped off his mask and gesticulated.

"To pull it off in the backend against someone who has an amazing second half of her race, I'm really proud of that."

The United States team spearheaded by Dressel stormed to the men's 4x100m relay gold medal in the third-quickest time ever to close the morning session.

Zach Apple brought them home after Dressel led off, with sizzling legs from Blake Pieroni and Bowen Becker ensuring they touched in 3:08.97, ahead of Italy and Australia.