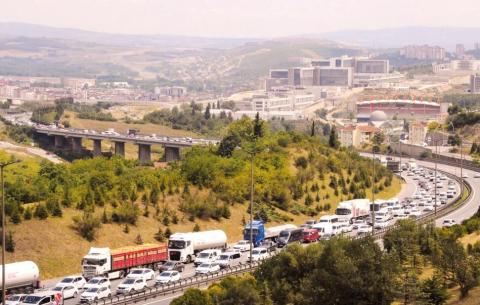 Millions of people hit the roads across the country on July 24 and 25 to return home from the Aegean and the Mediterranean coasts where they spent a nine-day-long Eid al-Adha holiday.

According to data from the police, some 46 people died and more than 400 were wounded during the long holiday, with eight dead in the traffic accidents over the weekend.

Traffic jams occurred from the north to the south as millions, either by their own cars or passenger buses, head back home as police authorities said the conjunctions at the entrances to some 43 provinces witnessed deadlocks.

It took hours to pass the partial traffic jams on the highways between the Black Sea province of Samsun and the capital Ankara, as well as the Central Anatolian provinces of Kırıkkale and Kayseri.

Police have taken special precautions for Istanbul, the most crowded city of the country with a population of more than 15 million people, and Bodrum, the world-famous Aegean district.

Helicopters flew over the Asian and European entrances to Istanbul, controlling the traffic jam and diverting the vehicles to alternative roads to prevent accidents.

Due to the departures, around 15-kilometer-long vehicle queues occurred in the Bodrum peninsula. Police helicopters also monitored the traffic density from the sky.

The Mediterranean province of Antalya was another tourism site people chose to spend their holiday. At the weekend, deadlocks occurred at the entrance to and the exit of the city.

Traffic paused at many conjunctions in the city as a 15-kilometer-long traffic occurred on the highway between Antalya and Muğla.<...