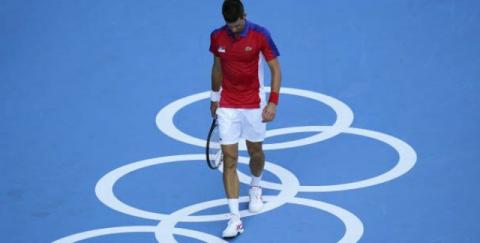 Olympians from all countries and sports approach Novak to talk, take photos, and even take some of the equipment from him, which does not bother the Serbian ace at all, although it can be hard.
However, Djokovic hangs out with everyone in the village, from Belgian gymnasts, through South American athletes, to giving advice to Serbian and Turkish Olympians.
This is exactly what the respected American "USA Today" wrote about in the text by the author Dan Wolken entitled: "Tennis star Novak Djokovic may just be the most popular man in the Olympic Village in Tokyo".
"Maybe"? There is no dilemma. We will share parts of that article.
"One minute, he's doing the splits alongside a gymnast from Belgium. The next he's chatting it up with Brazilian volleyball players, eating with a Mexican weightlifter and doling out advice to a cadre of Olympians from Turkey. Based on social media posts from his first few days in Tokyo, world tennis No. 1 Novak Djokovic may just be the most popular man in the Olympic Village. And it seems he's more than willing to oblige his fellow athletes with selfies, conversations and stretching techniques", Wolken starts.

Novak Djokovic may be the most popular star at the Tokyo Olympics https://t.co/QAIPMUPlGN

Djokovic differs from many stars in that, since he can be in a nearby luxury hotel, but he chose to stay in the Olympic Village.
"Djokovic is not just any athlete. He has won 20 Grand Slam titles, tying him with Roger Federer and Rafael Nadal for the most all time. He has made more than $150 million in just on-court earnings over the course of his career. He's likely going to go down as the best player in the history of...