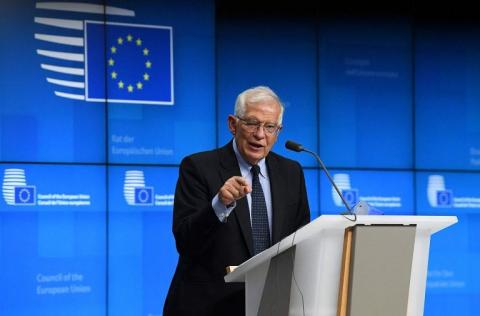 It took exactly one week since Turkish President Recep Tayyip Erdogan announced the re-opening of part of the fenced-off occupied city of Varosha for the EU to react with a comprehensive statement.

The statement issued by EU foreign policy chief Josep Borrell, however, was confined to a verbal condemnation of Ankara's action and admonitions regarding violations of international law and UN Security Council resolutions.

In substance, the EU has been a bystander in recent efforts to solve the Cyprus problem, a situation epitomised by the fact that in the UN-sponsored effort to find common ground in a five-way conference in Geneva in April, the EU was not invited, despite the fact that Cyprus is an EU-member state.

Instead, the participants, aside from the Republic of Cyprus and the Turkish Cypriot leader, were the three "guarantor powers" - Greece, Turkey, and the UK , which still maintains sovereign bases on the island- established in the outmoded 1960 Treaty of Guarantee, which is incompatible with the status of a contemporary sovereign state, and indeed one that is an EU member-state

EU summits over the last year have consistently postponed imposing sanctions against Turkey over its violations of international law in Cyprus' EEZ, the Aegean, and the Eastern Mediterranean, ostensibly in an effort normalise Greek-Turkish relations.

After condemning Turkey's "unilateral steps" in opening a small segment of Varosha, Borrell's statement once again included a vague threat that if Turkey does not revoke its decision to open Varosha, the EU will "use the instruments and options at its disposal to defend its interests and those of its Member States, as well as to uphold regional...