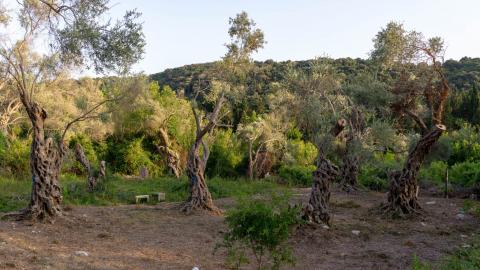 Strolling among the olive trees, the Adriatic Sea on the horizon, Dervishi said he planned to revive his family's olive oil tradition.

"My grandfather had more than 200 olive trees in Valdanos and he was known as a respectable olive oil producer," he told BIRN. "I can't achieve his level of production but at least I will try to make our olive grove sustainable."

Reserved: for the military

To the north of Ulcinj, at the southern tip of Montenegro near Albania, the bay of Valdanos was known for centuries for its olive groves and oil.

But for more than four decades, the Dervishi family and others were prohibited from visiting their groves, which were swallowed up by a Yugoslav military resort and then, with the collapse of Yugoslavia, passed to the Montenegrin state.

"When authorities took our olive grove, my grandfather was devastated," said Dervishi. "Olives were our wealth and an important source to top up the household budget."

Yugoslav authorities planned to build a military port at the site, but opted in 1980 to turn the bay into a holiday resort for those in the military and their families.

When it was built, the resort also featured a supermarket, a pastry shop and a restaurant offering a panoramic view across the bay and a spiral staircase leading down into the water. Reserved for military personnel, the beach and camp were closed other tourists and locals.

"When they were kids our parents would play in the...