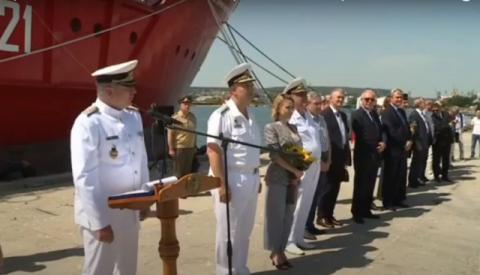 Bulgarian Oscar-nominated actress Maria Bakalova christened the ship "St. Cyril and Methodius", wishing the ship to carry the glory of the Bulgarian Navy and bear the name of the illustrious brothers.

The ceremony took place on the day of liberation of Bulgaria's coastal city of Varna today.

Speaking at Tuesday's solemn ceremony on raising the flag and christening the first Bulgarian military research vessel with hull No 421, the Bulgarian Chief of Defence, Admiral Evtim Evtimov, said:

"The flag of the Bulgarian  Navy, waved for the first time by the Danube Fleet, is also to be projected in the Southern Ocean."

Admiral Eftimov addressed the representatives of of the Bulgarian Naval Academy, Sofia University "St. Kliment Ohridski" and the Bulgarian Antarctic Institute, as well as the Defence Ministry, the Ministry of Education and Science, and everyone engaged in the process of acquisition and subsequent use of the ship.

He  also said the cadets and students of the Naval Academy will use  it for practical courses.

Turning to Bakalova, he expressed respect for her achievements and gratitude for agreeing to christen the ship, saying her success in a highly competitive field would serve as a motivation for the commander and his crew  at the execution of each mission.