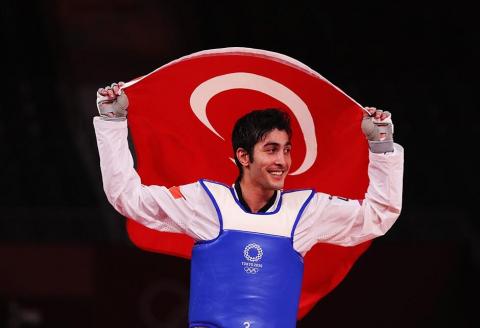 A 22-year-old taekwondo champ, who beat a neurological movement disorder in 2013 with hard work and dedication, has brought Turkey its first Olympic medal at Tokyo 2020 Olympics.

Involved in taekwondo since his childhood, Hakan Reçber had to let go of his passion when he was diagnosed with a rare neurologic disorder called transverse myelitis, an inflammation of both sides of a section of the spinal cord.

"I was 15. One day, I woke up and did not feel my legs. I could not walk when I was being taken to a doctor," Reçber said in an interview he made in 2016, describing what he went through.

"I got back to life with taekwondo training. While I was getting treatment, I worked hard training two to three times a day to get well," he said.

Competing in Tokyo 2020 Games, which was postponed last year due to the pandemic, Reçber got a bronze medal after winning against Bosnian taekwondo athlete Nedzad Husic.

"I am proud and happy that I won an Olympic medal for my country. We have done our best, got the best," Reçber said after the ceremony in Tokyo.

He especially thanked his parents, saying that they share this medal success as he does.

"My parents have a part in my beating the disease. I spent years following special training and nutrition requirements. I owe them big time," he said.

He also thanked his coach, Servet Tazegül, who was there for him in his most...