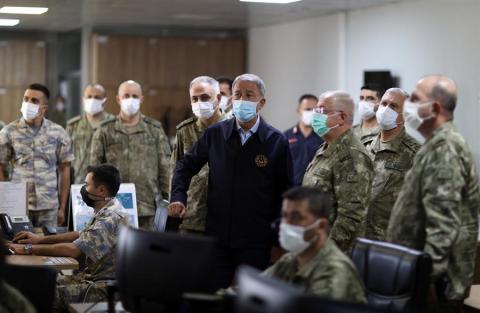 Turkey expects Greece to adopt peaceful political solutions rather than aggressive ones, Defense Minister Hulusi Akar said on July 27, calling for the disarmament of the Greek islands that have non-military status through treaties.

"We always tell our Greek neighbors that we favor finding political solutions to problems through peace, tranquility and dialogue within the scope of agreements. Our Greek neighbors, on the other hand, have not given up on provocative statements and aggressive rhetoric," the minister said during his visit to Turkey's Syrian border for inspection of Turkish troops.

Citing the militarization efforts of Greece on its islands in the Aegean, Akar said, "Our Greek neighbors have an aggressive attitude to lay claim to them as well."

"There is the [1923] Lausanne agreement and also the [1920] Paris agreement. Our Greek neighbors tend to ignore and neglect even these. This is unacceptable," Akar stated.

Greeks say, "There is a threat," Akar said, adding, "There is never any threat. Turkey does not have any aggressive attitude towards Greece at the moment. We call it dialogue, international agreements, the law, conventions. However, this peaceful approach of ours is constantly turned upside down with provocative statements."

Akar reacted to Greece's purchase of Rafale fighter jets from France and said, "Athens is in the midst of an "arms race."

"They buy planes, weapons, equipment. [But] it is not possible to change the balance of...