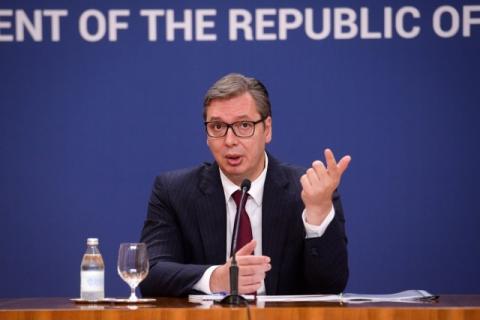 "We are closely following the events in Sarajevo and Banja Luka. Making decisions from the outside could never bring good results. We will have a meeting with the representatives of Republika Srpska these days. We are not entering into the process of implementing measures and countermeasures. This is happening in another country... Still, we cannot leave Serbia without support. We want peace. I am afraid that the atmosphere is the hottest since the Dayton Agreement," Vucic said at a press conference.
He announced that the 26th anniversary of the persecution of Serbs in the Croatian operation Storm, which he called the largest ethnic cleansing in Europe after the Second World War, would be marked on August 4 in Busija near Batajnica.
"We have to think about the economy and how to live together. We have to build fraternal relations with Bosniaks. Peoples have to make important decisions that politicians don't have to like," he added at a press conference at Belgrade's Palace of Serbia after the reception of the young athletes from Kosovo and the region.
Speaking about the statement of Bakir Izetbegovi, who said about the protest of the politicians from RS as going on a collective vacation, he said that he is always frightened when he is faced with "the unbearable ease of irresponsibility".
"I have no comment. The situation is very serious. And those who say that Republika Srpska lost should think harder, as the one who was helped by a foreigner has never won. It is time for Bosniaks and Serbs to regulate their relations on their own... What will we gain by conflict? I listen to empty heroic stories from all sides. I hope that when people think about conflicts, they think that it will only affect someone else... There is no going back from...

In Serbia, the Fight for ‘Green’ Votes Turns Ugly