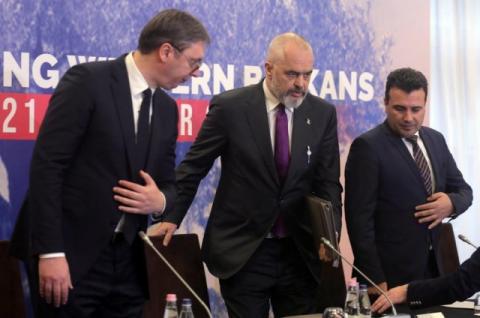 The leaders of Serbia, Albania and North Macedonia have criticized Brussels for its slow EU enlargement, promising to continue with its own travel zone and business zone while waiting for the bloc to receive them.
"We know that there is fatigue from EU enlargement," Serbian President Aleksandar Vucic said in an interview.
"We need to see what we can do for ourselves, what we can do for our people, how we can expand our markets."
Zoran Zaev, the Prime Minister of North Macedonia, expressed frustration that "the EU is not fulfilling its promises", adding: "We must accelerate the practical benefits for our citizens".

Edi Rama, the Prime Minister of Albania, compared the work with Brussels with the play by Samuel Beckett "Waiting for Godot", in which two men engage in a series of often absurd conversations while anticipating the arrival of someone who never comes.
The Balkan "mini-Schengen" travel and business zone, modeled on the EU's free travel arrangement, will be officially unveiled on Thursday. It will include a gradual easing of travel restrictions, faster "green lanes" at borders, reduced waiting times and easier access to work permits.
The paper states that it hopes that the zone, which Vui said should be created before the end of the year, will eventually include Montenegro and Bosnia and Herzegovina, and also remain open for the disputed Kosovo.
The Serbian leader said the Balkan region could no longer wait for the EU to unite, faced with ethnic and religious conflicts and economic failure since the break-up of the former Yugoslavia after 1991.

Quint Ambassadors with Vucic again; Do they carry a new proposal?

Armored vehicles of the Serbian Army near Jarinje VIDEO