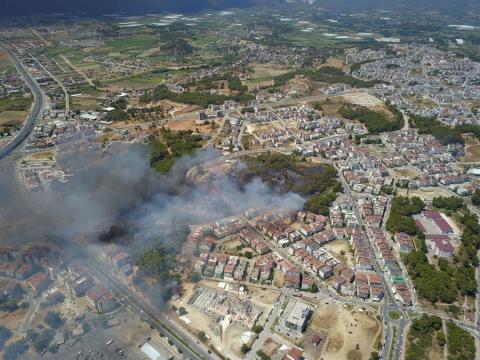 A massive fire erupted in two different locations in the southern province of Antalya's Manavgat district has destroyed dozens of hectares of forest cover and caused the evacuation of five settlements.

The cause of the fires in the Yeniköy and Side neighborhoods of the district is still unknown.

Many teams from neighboring provinces were deployed to battle the flames, which spread with the help of wind.

A plane, 19 helicopters and 103 fire trucks with 412 firemen were sent to the region, but authorities said their efforts to get the fire under control failed.

After strenuous efforts, teams managed to keep the fires advancing towards the petrol stations on the Antalya-Alanya highway at bay.

Speaking to private broadcaster CNN Türk, Manavgat Mayor Şükrü Sözen said that the flames reached residential areas and that many houses and workplaces burned down.

"It's an unbelievably bad sight. We literally didn't even realize what we were in," Sözen said, adding that residential areas in the region were evacuated as a result of the fire that spread to the city center of Manavgat.

Sözen said the fire was effective at a point far from the coast and that there was nothing to worry about in tourism areas.