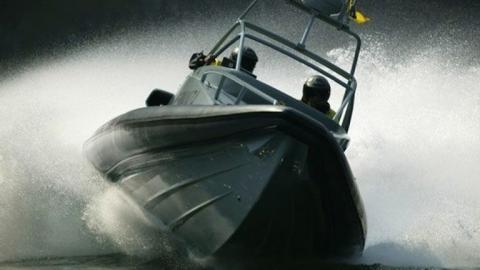 Their story, contained in court documents seen by BIRN, speaks to the well-placed connections that grease the wheels of Albanian drug trafficking, connections that in the case of Seferi and Ajdini stretched all the way to the security detail of the country's then interior minister.

Cannabis cultivation was flourishing in Albania in summer 2016 and Prime Minister Edi Rama faced daily accusations that his government was directly involved.

Seferi and Ajdini were given their own chance by Saimir Kurti, former director of the state Job Market Office in the town of Kavaja near the Albanian coast. They met him in the hospital in the port city of Durres, where Kurti was under arrest and guarded by police.

His predicament did not stop Kurti from offering the pair a speedboat and 100 euros for every kilo of cannabis they sent to Italy.

At about 11.30 p.m. on August 3, 2016, a luxury car backed a speedboat into the water at Golemi beach, one of Albania's most popular just north of Kavaja. It was loaded with 290 kilograms of cannabis.

For Seferi and Ajdini, it marked the start of a short but action-packed career in drug trafficking, a career that saw them dine with high-level drug dealers in the southern Italian port of Bari, survive a bomb blast and ferry more than a ton of cannabis in one go with the alleged help of two bodyguards of Albania's then interior minister, Saimir Tahiri.

Tahiri was charged with abuse of power and drug trafficking. In 2019, he was given a suspended sentence for the former and acquitted of the latter. An appeals court ordered a retrial.

Tahiri's former bodyguards, Agustin Deda and Hekuran Marku, are on the run. They have denied any wrongdoing in...

Thousands Protest Against Femicide That has Shaken Albania

Week in Review: Shuffling and Reshuffling

"The Balkans will miss Angela Merkel"