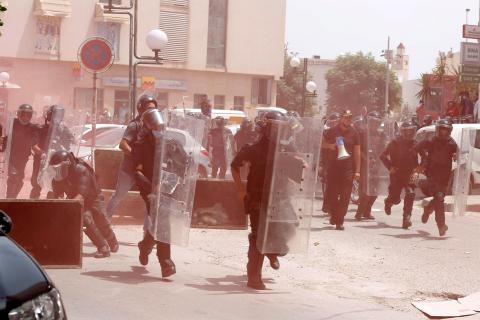 Since Tunisia's President Kais Saied plunged the country into political uncertainty in a power grab, an armoured vehicle has guarded the gates of the now suspended parliament.

But away from the legislature and the police roadblocks on the wide boulevards of Tunis, there are few outward signs of an intense political crisis - and many have welcomed the president's orders.

Najet Ben Gharbia, a 47-year-old nurse, said she had been waiting "a long time" for such a move.

"There is still great poverty," Ben Gharbia said, describing the crippling inflation that has stripped the value of income, making red meat too expensive to buy. "People are miserable."

Thousands celebrated on streets after Saied's shock decision to sack the prime minister.

Surging rates of COVID-19 in the North African nation and the accompanying pandemic restrictions have hit the economy hard, adding to the woes of Ben Gharbia's family.

It is a common refrain among those on streets of capital AFP spoke to.

Since clashes that erupted Monday in front of parliament between supporters of the president and backers of the Islamist-inspired Ennahdha party, the strongest group in the coalition government, calm has returned to Tunis.

But there is also uneasiness as to what the future will hold.

Some point out that Ben Ali also invoked the constitution in 1987 when he seized power, before turning to authoritarianism.

"We are a little worried about what may happen, to go back to...