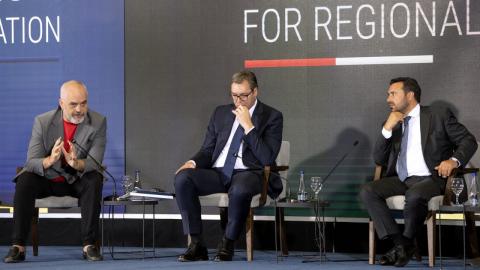 North Macedonia, Serbia and Albania aim to practically scrap all border obstacles for their citizens and businesses by 2023, eliminating long and tedious waits for travellers and complicated paperwork for companies.

This is what North Macedonia's Prime Minister, Zoran Zaev, Serbian President Aleksandar Vucic and Albanian Prime Minister Edi Rama announced on Thursday in Skopje, following their two-day meeting, which was part of a regional cooperation initiative.

"By 2023, between our three countries, we will have zero waiting on the borders. Whoever wishes to join us is welcome to do so," Albania's Prime Minister Rama said.

Unofficially dubbed the Balkan "Mini-Schengen", the initiative was renamed "Open Balkan" on Thursday.

Commenting on the absence or reserve of the other Western Balkans countries in supporting this initiative, referring to Kosovo, Bosnia and Herzegovina and Montenegro, the three leaders said there was no excuse for not joining in.

"What divides us should be no excuse for lack of cooperation," Serbia's Vucic said, "If someone has a problem with Kosovo's name tag having an asterisk on it, then put a square after Serbia's name, we have no problem with that, as long as we are cooperating."

The host, North Macedonia's Zaev, said a good thing with the initiative is that it is entirely open and that each country can choose whether to participate.

"The rest of Europe will respect us more if we are united, and besides, each of the Balkan countries can choose which part of this initiative they want to participate in, according to its own interests," he said.

Although initially included in the talks on the initiative, Bosnia and Herzegovina, Montenegro and Kosovo have chosen not to support it.