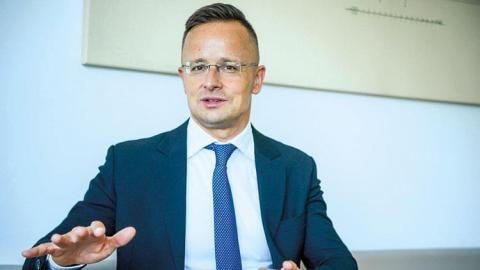 Closer economic cooperation with Turkey is a beneficial step for the European Union, a Hungarian top diplomat has said, noting that the union needs closer and stronger cooperation with Ankara if it wants to be economically strong.

Hungarian Minister of Foreign Affairs and Trade Péter Szijjártó shed light on the issues on Turkey-EU relations from the ongoing negotiations on the update of the Customs Union agreement to the new migration influx resulting from the worsening of the security situation in Afghanistan.

Visiting Istanbul for one day to attend the Turkic Council meeting, Szijjarto stated that Hungary's approach to the modernization of the Customs Union was within the framework of more frequent economic cooperation with Turkey.

"But others in the EU say modernization of the Customs Union cannot be discussed without some political preconditions being met. So I don't expect a deal anytime soon," he noted.

Underlining that a large migration wave is expected after NATO's decision to withdraw from Afghanistan, the minister said that the war-ravaged country's border with Iran was not well-protected and that he was concerned about this situation.

"If you look at the map, you will see that a migration wave that will start from Afghanistan cannot be stopped by anyone until they [refugees] come to Turkey," Szijjártó said, adding that the promises made by EU must be fully met in order to expect such an approach from Turkey, which is the first possible country where the migration flow can be stopped.

He also emphasized that the EU made an agreement with Ankara to which it had committed 6 billion euros, but this payment has not been realized yet.

"We call on the EU Commission to resolve this issue as...

LGBTIQ Rights Should Be Defended across the Bloc, Same-Sex Marriages to Be Allowed in all Member States
Biro Rozalia, at Polish Economic Forum: We need to develop Carpathians brand