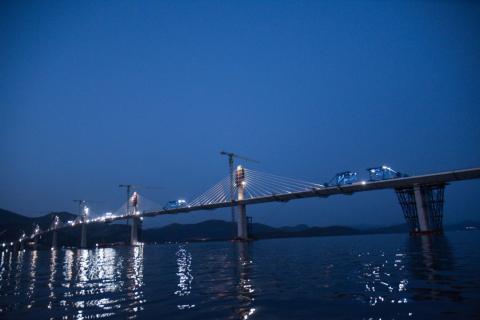 The Peljesac Bridge, linking Croatia's Peljesac peninsula with the rest of the country, was fully joined together on Wednesday night, with the installation of the last, 165th segment of its steel span.

"The Peljesac Bridge is a fascinating strategic achievement of the Croatian people and the government that will serve generations to come," Prime Minister Andrej Plenkovic said at the ceremony, together with other officials.

Locals gathered along the shores, as well as on boats at sea, to watch the joining of the bridge, which was followed by a long firework display.

However, the first vehicles will not pass over the bridge until the spring of next year. The complete project of the bridge with access roads will be completed by June next year.

Locals from the Dubrovnik area are looking forward to the opening of the bridge because they will not have to waste time crossing the border with Bosnia to get to the rest of Croatia.

Photo: Government of the Republic of Croatia.

"The decades-long dream of connecting Croatia" was an old promise of past Croatian governments. The current government pointed out that the European Commission ordered a preliminary feasibility study back in 2013, "which showed that the Peljesac Bridge was the best solution for joining Croatia's south with the rest of the country".

In April 2018, the government led by Plenkovic's Croatian Democratic Union, HDZ, signed a contract to build the bridge with a Chinese company.