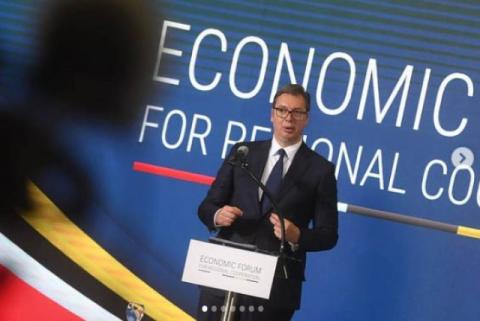 The prime ministers of North Macedonia and Albania, Zoran Zaev and Edi Rama, are also taking part in the forum.
Vui was first handed letters of thanks for his help in the fight against coronavirus and donations of vaccines to North Macedonia. He thanked them and then announced the big plans that North Macedonia, Albania and Serbia have.
"What we are doing in Skopje, Tirana and in Belgrade are great things. If we succeed, it will be a huge success, and if we fail - at least it will be known that someone tried. In the next year, we want to achieve that at least in three countries we can enter without borders, for trucks driving from Skopje to Belgrade or Tirana to pass without stopping, without anyone asking them anything, while others will have to stop for a while", Vucic said.
He emphasized that the three countries should show that they are "no longer minors" and that they do not have to serve anyone except the people.
He also said that most companies came to the economic forum from Serbia - 217, which shows how much interest there is in Serbia for cooperation in the region.

"When we started with this initiative, it seemed to all three that it was something good, something that was changing things in the Balkans. We decided to turn our heads from the past to the future," said Vucic.
He added that sincere trust has developed in the last two years. "It is important for us to show to the people of our countries that we are able to make decisions on our own and improve the lives of citizens, to be on the European path but not to wait for someone to lead and guide us, but to work in the interest of our citizens", President Vucic said.
He pointed out...