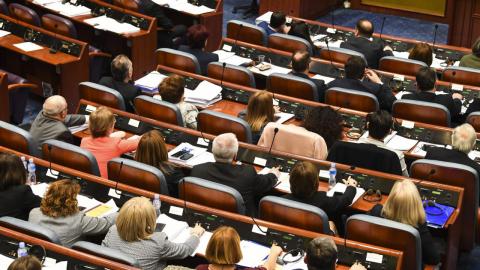 North Macedonia's parliament has adopted a resolution which draws so-called "red lines" in talks with Bulgaria on the Macedonian identity and language.

Initially filed in early July by the main opposition right wing VMRO DPMNE party, it was supported by 95 out of the 96 MPs present in the 120-seat parliament, with only one abstaining.

VMRO DPMNE proposed the resolution, it said, to define the country's position on the Macedonian language and identity in ongoing talks with neighbouring Bulgaria.

"These are our red lines. This is something that no one had or will have a mandate to cross," VMRO DPMNE MP Timco Mucunski told the plenary hall.

He added that the resolution would give North Macednia's diplomacy a "solid tool" to internationally defend the Macedonian identity, consisting of the Macedonian language and traditions and the nation's collective integrity.

Among other things, the resolution states that negotiations with Bulgaria should be led "on an equal and principled basis, without any conditioning … and with respect to the dignity of the Macedonian people".

More specifically, it says that during any talks, there should be "unequivocal respect" for the "autochthony of the Macedonian nation, its historical, linguistic, cultural and religious continuity", as determined not only by the country's own scientific institutions but by contemporary Slavistic, linguistic and historic science experts and international law.

Neighbouring Bulgaria blocked the start of North Macedonia's EU accession talks last year, citing disputes over its history, language and identity, which it insists have Bulgarian roots. Skopje has repeated that it cannot compromise over sensitive issues such as identity.