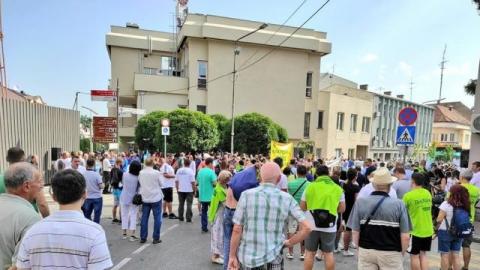 Hundreds of locals from western Serbia, but also activists and opposition politicians from other parts of the country, gathered on Thursday in Loznica, western Serbia, to protest against amendments to the local urban plan to meet the needs of a lithium mining investment by the Anglo-Australian multinational corporation Rio Tinto.

Rio Tinto Group is developing the Jadar project near Loznica within which it intends to open an underground mine to exploit jadarite, from which lithium, a mineral used to produce batteries, will be extracted.

Lithium is crucial for the transition to renewables, but mining it is environmentally costly, experts warn.

Marijana Petkovic, from the initiative "We will not give Jadar", told the protesters that adoption of this plan needs to be stopped as it would be "the beginning of all later permits on the basis of which they will request permits" for much else.

"It's a poisonous plant. They came in 2004, they never answered us as people on three key things: what to do with the noise; with the water; what is the minimum amount of pollution. None of what they promise can be fulfilled. One well has been leaking for five years, and every year a fee is paid for water pouring into the fields and damaging the crops, because it is possible that it cannot be repaired," Petkovic said at the protest.

She criticized President Aleksandar Vucic's proposal of the referendum on Rio Tinto investment, claiming that the corporation has so much money that it can pay off everyone, adding that they are already paying local farmers in the area for damage to land they already caused.

Two Serbian NGOs, the Coalition against Environmental Corruption and the Podrinje Anti-Corruption Team, PAKT, have filed charges against Rio...