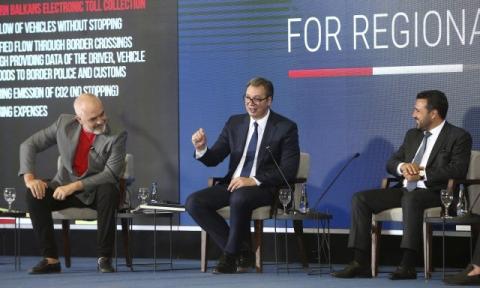 Serbian President Aleksandar Vucic said today that he was sorry that some in the region were against the "Open Balkans" initiative, because they would like to remain stuck in the 1990s and within closed borders.
"They choose not to cooperate with each other. But that is their choice, and ours is cooperation, openness and progress. But everyone has the right to choose their future," Vucic said, addressing the media from Serbia in Skopje.
He pointed out that he was very satisfied with what was done today in Skopje.
"We have built the future. In a year and a half, we will have the strength to open our borders, and whoever goes to the sea to Greece, I mean ordinary citizens, will have one crossing, if they go to Albania, none, and if they go to North Macedonia, no crossing. This is a huge saving for trucks and everyone in export business", said Vucic.
"I think that Rama is doing good things for his people, and the fact that Kurti does not understand that and thinks that it is time to close the space with chauvinistic messages, threats and blackmail... I think he is very wrong, but I have nothing against that," said Serbian president, Aleksandar Vucic.
The representative of the Self-Determination Movement (Vetevendosje) in Albania, Boiken Abazi, criticized the participation of Prime Minister Edi Rama in the Forum for Regional Cooperation in Skopje. He said that Rama was working in accordance with Serbia's expansionist plans.
Former FBI agent and Nonverbal Communications Expert Joe Navarro also conducted an analysis of President Vui's non-verbal communication and his behavior. The president was asked to comment on that. "I didn't know they are dealing with it, if you look at the video, you will see that I didn't make any bad facial...

Quint Ambassadors with Vucic again; Do they carry a new proposal?

Armored vehicles of the Serbian Army near Jarinje VIDEO