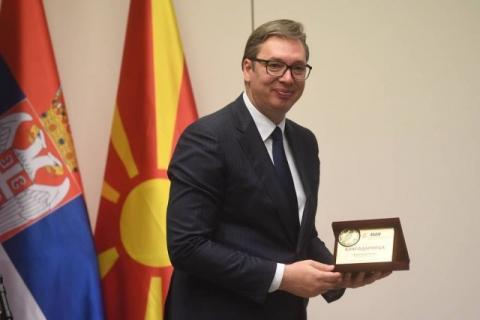 "We behaved normally, the way you would have behaved in this situation... We are not asking for anything from the Macedonians. Only brotherhood and friendship and to have the closest and best relations," Vucic said during his address to the media.
"If we fail, it will be written that someone at least tried. To improve the lives of citizens, and I am proud that we have 217 companies here in North Macedonia", said Vucic, who is attending the Economic Forum on Regional Cooperation.

This morning in Skopje, the President of Serbia, Aleksandar Vui, was presented with letters of thanks for Serbia 's assistance in vaccinating the citizens of North Macedonia during the COVID-19 pandemic.
On that occasion, Vui said that it is easy to help when it is not difficult.
"We will help in the future, it is easy when we are all good, when it is hard for everyone, then you will get the greatest help from your closest and first neighbor. Thank you for the friendship - our relations are greatly improved," Vucic said.
The President of the Chamber of Commerce of North Macedonia, Branko Azeski, presented President Vui with a letter of thanks from the Macedonian Chamber for providing assistance in vaccinating businessmen, which was organized at the end of March in Serbia, and then revaccination.
"Thank you so much for what you have done for the business community," Azeski said.
The letter of thanks from the Macedonian Association of Journalists was handed over by the president of that association, Ivona Talevska, for the vaccination of media representatives in Serbia.
Talevska pointed out that President Vui showed solidarity and humanity towards the Macedonian people, and that because of that, as an association, they were the first to carry...