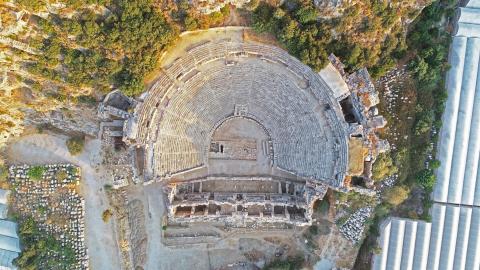 The 13th season excavations have started in Myra-Andriake, one of the six most important cities of the Lycian League located in the Demre district of the southern province of Antalya.

Professor Nevzat Çevik, the head of the excavations, stated that the Myra-Andriake excavations would continue all year round with the decision of the Culture and Tourism Ministry.

"The ancient city of Myra is the 'Pompeii' of Anatolia. An incredible history lies 10 meters below the ground," the professor said.

A team of 30 people, including six scientists from Akdeniz University, Isparta Süleyman Demirel University and Koç University, is working in this year's excavations in Myra, which was once the capital of the Lycian League, and the ancient city of Andriake, the port of Myra. The team started to work in the orchestra of the Roman Theater in the ancient city.

"At the beginning of July, we made preliminary preparations for the excavations in the ancient city of Myra. Then we started working in the orchestra section of the ancient city's theater. During the excavations last year, we uncovered important finds from the Hellenistic period, documents and discoveries that will shed light on history. We continued from where we stopped working last year. We are unearthing the Hellenistic structures built before the Roman theater. We went 4 meters deep and are unearthing the Lycian structures and Myra structures belonging to the Hellenistic period one by one. We found clay and baked sculptures. These are the first signs that we will have a productive excavation period this year. We will continue the excavations in the workshops in front of the Granarium in Andriake port city," Çevik said.

Reminding that the Granarium in the ancient city of...