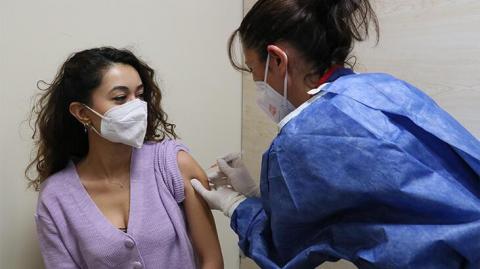 More than 26 million people have been fully vaccinated in Turkey, corresponding to more than 42 percent of the population aged 18 and above, with the total doses of jabs administered nearing 72 million since a mass vaccination campaign that was launched in January, according to official figures.

The country is continuing its intensive vaccination campaign to curb the virus' spread, as everyone 18 and over is eligible for vaccine shots and more than 40.54 million people have gotten their first dose, while over 26.11 million have received their second jabs as well.

Meanwhile, health professionals made significant warnings by emphasizing the increase in the number of admissions to hospitals and the sharp rise in positivity rates following the PCR tests that were made.

İlker İnanç Balkan, an infectious diseases specialist from Istanbul University, pointed out that people in the risk group with low immunity, such as cancer patients, have been infected with COVID-19 because of their unvaccinated relatives, even though they have been vaccinated.

Balkan pointed out that although most of the patients who applied to hospitals with the suspicion of COVID-19 experienced the symptoms, they were often late in getting the test due to the delusion of air conditioning sickness.

He said that this delusion both delayed the treatment and increased the rate of the virus spread.

"It is necessary to apply to...