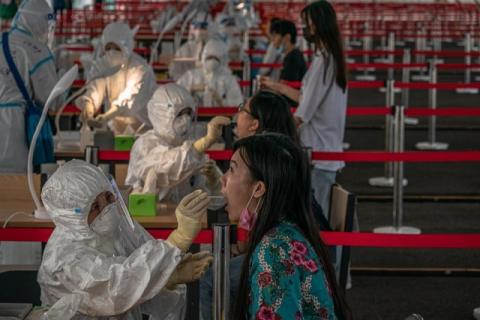 According to state data, nearly 200 people have been infected since the virus was detected at the airport on July 20th.
All flights from Nanjing Airport will be suspended until August 11, the Global Times reported.
Officials also began mass testing after criticism for their "failure."
All 9.3 million residents of the city, including those who came to visit Nanjing, will be tested, the state-run Xinhua news agency reported.
Officials believe the hotspot is linked to a more contagious, delta strain of the coronavirus, and that the infection has spread due to the discovery of the virus at a busy airport. The virus has spread to at least 13 cities.
The airport administration has been reprimanded, and the Communist Party's disciplinary body determined that there were "problems, such as lack of supervision and unprofessional management."
Tests show that the virus has now spread to at least 13 cities, including Chengdu and the capital Beijing. Local officials in Nanjing say seven of those infected are in critical condition. Some on Chinese social media have questioned the effectiveness of the Chinese vaccine against the delta variant.
It is not known if the infected were vaccinated. A number of Southeast Asian countries that rely on the Chinese vaccine have recently announced that they will use vaccines from other manufacturers.