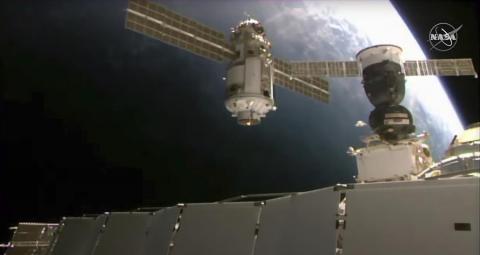 A newly arrived Russian science lab briefly knocked the International Space Station out of position on July 29 when it accidentally fired its thrusters.

For 47 minutes, the space station lost control of its orientation when the firing occurred a few hours after docking, pushing the orbiting complex from its normal configuration. The station's position is key for getting power from solar panels and or communications. Communications with ground controllers also blipped out twice for a few minutes.

Flight controllers regained control using thrusters on other Russian components at the station to right the ship, and it is now stable and safe, NASA said.

"We haven't noticed any damage," space station program manager Joel Montalbano said in a late afternoon press conference. "There was no immediate danger at anytime to the crew."

Montalbano said the crew didn't really feel any movement or any shaking. NASA said the station moved 45 degrees out of attitude, about one-eighth of a complete circle. The complex was never spinning, NASA spokesman Bob Jacobs said.

NASA's human spaceflight chief Kathy Lueders called it "a pretty exciting hour."
The incident caused NASA to postpone a repeat test flight for Boeing's crew capsule that had been set for Friday afternoon from Florida. It will be Boeing's second attempt to reach the 250-mile-high station before putting astronauts on board; software problems botched the first test.

The launch of Nauka, which will provide more room for scientific experiments and space for the crew, had been...