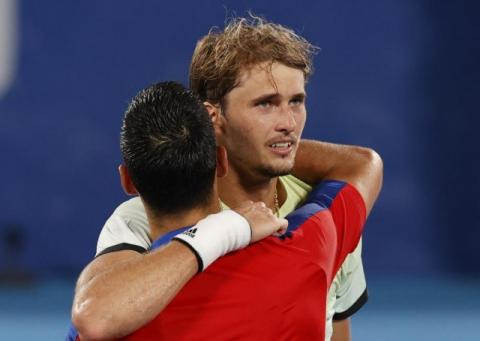 World No. 1 lost the semifinal match to the German Alexander Zverev after three sets - 6: 1, 3: 6, 1: 6.
Djokovic will play for the bronze medal in singles, which he won in Beijing in 2008, and his opponent will be Pablo Carreño Busta.
Zverev's rival in the fight for gold will be the Russian tennis player Karen Khachanov, who earlier in the morning beat Carreño Busta 6: 3, 6: 3.
Many interpreted the duel between Djokovic and Zverev as "the final before the final", but we had uncertainty in the first set only in the introductory three games.
After 37 minutes of tennis in the first set, Djokovic took advantage of the first set point for a 1-0 lead.

However, there has been an incredible decline of probably the most mentally stable player on the planet, which will be studied and analyzed for a long time to come.
Fatigue or whatever, only Djokovic seemed to turn off the button, and after the break, he allowed the opponent EIGHT consecutive games and a complete turnaround.
Zverev first responded with a break, with zero, and then tied a total of nine points and was back to the match. More precisely, he won 12 of the next 13 points, of which two were breaks and we had a turnaround right out of nowhere.
Zverev served very safely for the set, so the match went to the third and decisive set, and Djokovic took a long break in the locker room. In that way, he tried to cut off the German's onslaught, but also to somehow pull himself together. However, he failed.
Zverev continued to play with a lot of self-confidence, and great nervousness crept into Novak's shots. Even when he had a break opportunity, the opponent served masterfully and saved himself in that way every time.

On the other hand, he allowed as...