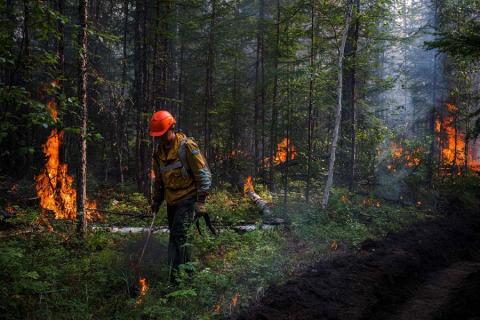 The father and son stood in the forest burning around them, the elder with a shovel in hand, the younger with a plastic bottle filled with gasoline.

As the son poured the fuel onto the forest floor, watching as the rising flames rendered white birch trunks black, his father shovelled dirt onto embers that popped across the other side of a trench marked for a controlled burn.

Ivan Fyodorov, 65, and his 42-year-old son Pyotr were helping firefighters on an afternoon in late July to prevent a wildfire from reaching their land in the Siberian region of Yakutia.

While large wildfires are an annual occurrence in Siberia, the blazes have hit Yakutia with an increasingly ferocious intensity the past three years, scorching its legendary vast northern forests known as the taiga.
With firefighters and emergency services struggling, hundreds of volunteers have joined the efforts to contain the blazes, which experts have linked to climate change.

Fyodorov said the first fire had come close to his farmland around the village of Byas-Kyuel in June, but they were able to beat it back.

Then came the second. Then the third.

"At that point we didn't have the strength. It's good these guys came," he said of the dozen firefighters working nearby.
Citing government inaction, Fyodorov said that he and his family have taken the fight into their own hands.
Pyotr had been helping him for 17 days straight, while his other three sons and daughter travelled four hours by car from the regional capital Yakutsk at the beginning of July to do their part.

"We haven't been able to cut our hay yet because we've been busy fighting the fires," Fyodorov said.
Asked what he would do if the fires keep intensifying...