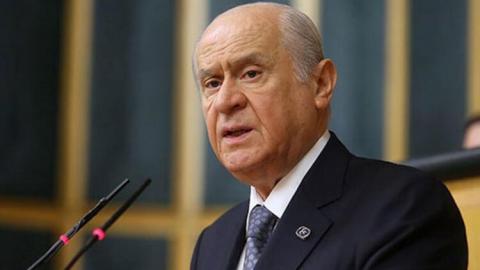 Nationalist Movement Party (MHP) leader Devlet Bahçeli has said his party's People's Alliance with the ruling Justice and Development Party (AKP) would continue as long as the people of Turkey want.

"We did not just form an electoral alliance," he told daily Türkgün in an interview on July 30.

The People's Alliance will make Turkey a regional power and a leading country and will ensure the achievement of its 2023 goals, he added.

"In our alliance, the interests of the nation, not personal interests, are the basis, the main axis," he said, emphasizing that the People's Alliance is the natural result of a domestic and national stance against the "very tough and multi-frontal attacks" that Turkey has been subjected after the coup attempt.

"Those looking for cracks, fractures, rips and defects in the People's Alliance [are] the collaborators who call July 15 [2016 coup attempt] a theater and a controlled coup," he said.

An alliance with a solid stance and foundation is not damaged by any provocations, Bahçeli added.

Responding to a question about how long the People's Alliance will last, Bahçeli said, "Until wherever and until when the people want it to continue. It's not right to set a deadline. We look at what people say."