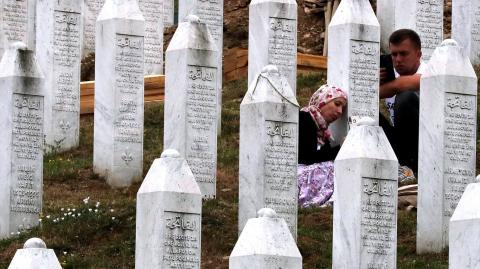 Greif declared that "there was no genocide" and the casualty figures for the number of Bosniaks from Srebrenica who were killed in July 1995 was lower than verdicts issued by the International Criminal Tribunal for the Former Yugoslavia, ICTY have established.

The report also claims that a large proportion of those killed were soldiers, not civilians.

The establishment of the commission provoked concerns among Balkans experts internationally that it was a politically-motivated genocide denial project by the Bosnian Serb authorities.

After the commission's report was criticised for ignoring or contradicting some of the facts established by the ICTY and other courts, BIRN examined the justifications for some of its key points.

Were fleeing Bosniaks combatants or civilians?

In its report, the commission claims that a convoy of fleeing Bosniaks that prepared to depart from the villages of Jaglici and Susnjari in the Srebrenica region on July 11, 1995 as Bosnian Serb forces overran the enclave, with the aim of escaping to safety in Bosniak-controlled territory in the city of Tuzla, was a "military" column.

The report says there were two large groups involved - civilians and "members of the 28th Division of the Second Corps of the Bosnian Army".

Calling on findings by Richard Butler, a military expert witness who testified in almost all Srebrenica trials at the ICTY, it claims that "it is possible to draw a conclusion that the column had been a military formation composed of able-bodied men and a very small number of women and people under 16 or over 60 years of age".

The ICTY's judgments state that around a third of the column was made up of members of the 28th Division, although not all the soldiers were armed,...