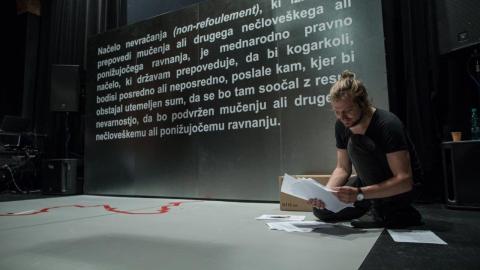 His team also visited Bosnia, seeing the tough situation on the ground and talking to migrants, listening to their points of view.

"The police and Interior Ministry are on TV every day, but these people never get a voice," the 29-year-old director states.

The play won seven prizes at this year's Maribor Theatre Festival, a landmark Slovenian theatre festival, including the main prize.

The festival jury said that the play "defends humanity and the fundamental principles of European civilization and culture".

"I am very happy that we received those awards," Divjak says, adding that he is happy that the play has been taken seriously, not only as a gesture or as activism but as a work of art.

He adds that art also has the power to raise awareness on important issues because it can present them "in a more personal way".

"One can see how some political decisions have very personal consequences," he reflects.

In the play, five actors retell the experiences of migrants who experienced being violently pushed back by the Slovenian and Croatian police.

All those accounts are based on migrants' own testimonies, recorded by Border Violence Monitoring Network, BVMN, an NGO that gathers several NGOs assisting migrants, including Zagreb's Are You Syrious? and Ljubljana's Info Kolpa.

The actors sit outside the "stage" in the auditorium; the stage is actually a floor with marked locations of incidents gradually filled with various objects that illustrate individual incidents, such as food, sleeping bags, broken cell phones and police batons.

There is also a panel on which the actors place written testimonies of...