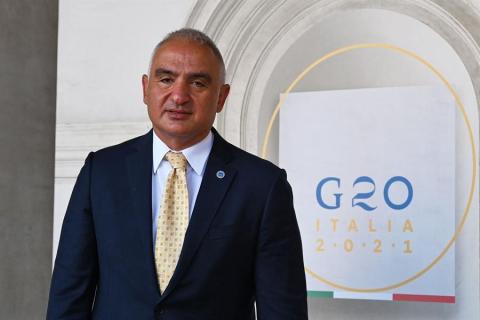 The Rome Declaration was announced after the first G20 Culture Ministers' Meeting in Rome in a major two-day event held under the Italian G20 presidency.

Ministers from G20 countries and representatives of international organizations came together at the Barberini Palace for the G20 Ministers of Culture meeting, which was held for the first time in the history of the G20.

The meeting began Thursday in the arena of the Colosseum, attended by culture ministers of the 20 largest economies along with 40 high-level cultural delegations.

The agenda included support for cultural sector employees, protection of cultural heritage against natural disasters and smuggling, the importance of culture in human capital and culture as the driving force of growth.

Minister of Culture and Tourism Mehmet Nuri Ersoy represented Turkey and left Rome after his speech.

In the Rome Declaration, it was stated that culture plays an important role in promoting the resilience and regeneration of economies and societies heavily affected by the coronavirus outbreak and it is the basis for re-action.

The declaration, which draws attention to the fact that cultural and creative sectors are an important source of work and income, it was emphasized the importance of unleashing the transformative power of culture to support and heal them in the epidemic crisis by considering the needs of these sectors.

Referring to relevant resolutions of the United Nations Security Council, it was emphasized that the destruction and illegal trade of cultural heritage assets is a serious crime and a threat to international peace and security. In this regard, the strengthening of joint and coordinated actions was underlined in the declaration.