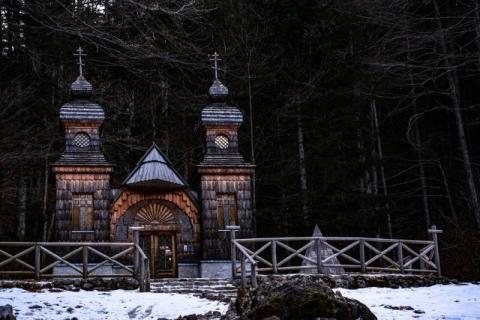 Kranjska Gora – The annual ceremony in memory of Russian POWs who perished building the Vršič pass during the First World War will be held at the Russian Chapel below Vršič mountain pass on Saturday. The first Slovenia-Russia Friendship Day will be also celebrated on the occasion.

Regardless of the differences in political stances between the two countries, the presidents believe that efforts should be made to promote dialogue in the interest of peace and friendship, Pahor’s office said, noting that the Russian Chapel symbolised the ties between Slovenians and Russians.

Attending today’s ceremony, Pahor will lay a wreath at the chapel. The commemoration is to be held under the auspices of Economy Minister Zdravko Počivalšek, a deputy prime minister, who will address the event as the keynote speaker.

The Russian delegation will include Konstantin Kosachev, the deputy speaker of the Federation Council, Russian parliament’s upper house. The Russian Orthodox Church will be represented by Archbishop Tikhon, the primate of the diocese of Berlin and Germany.

The wooden Orthodox style chapel was built near Vršič in 1916 by the surviving Russian POWs to honour those who had not made it as they had been buried in an avalanche during the construction of the Vršič Pass.