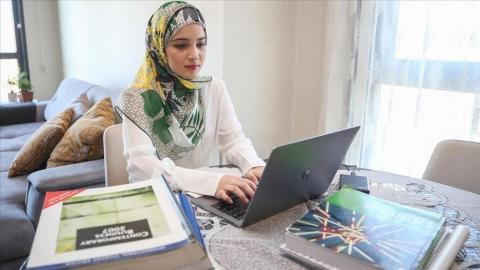 A Syrian girl, 22, has graduated first in her class with top honors in Turkey.

Yasmin Nayal, who fled the Syrian civil war in 2016 and went to Turkey with her family, completed her undergraduate education in the new media department at Bahçeşehir University (BAU) in Istanbul. She completed a double major in the psychology department.

Nayal, who is continuing her studies by doing a minor in the department of political science and international relations, told Anadolu Agency about her academic success and dreams in Turkey.

Recounting that she quickly adapted to Turkey and could learn Turkish easily thanks to her Turkish friends, Nayal said she dreamed of being at the top of the class but at first she could not believe it when she graduated at the head.

She said she researched a university to complete her studies before coming to Turkey and because she liked the country, she eliminated other countries.

"My brother lives in Canada and he wanted me to go there, too. However, I did not want to go to Canada or other European countries. I especially wanted to come to Turkey and study," she said.

Her goal is to work in the media sector and Nayal said she wants to develop more and plans to work in an international organization and then open her own company.

"I would like to thank Turkey very much because I wouldn't be here if it wasn't for Turkey," she said. "It's really fun to study here. I hope I will do a favor to Turkey in the future."

BAU Global President Enver Yücel highlighted that the university has the highest number of international students in Turkey.

Stating that the success rate of foreign students is high as that of Turkish students, Yücel said: "Last year, a student from...