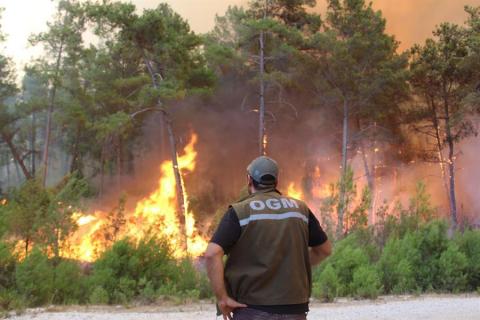 Two others injured by the raging blazes in Antalya's Manavgat district were evacuated and taken to a local hospital, said the sources, who asked not to be named due to restrictions on speaking to the media.

The fires in Manavgat had affected at least 275 people as of Friday afternoon, according to official data.

88 of 98 forest fires under control in Turkey: Minister

Turkey's agriculture and forestry minister on Saturday said his country contained most of the forest fires since Wednesday.

Bekir Pakdemirli said in a tweet that the efforts were underway to take the remaining 10 forest fires under control.

According to the figures he shared, forest fires are ongoing in Antalya, Mersin, Adana, Muğla, and Osmaniye provinces of Turkey.

Turkish authorities continue the efforts to contain forest fires in the Manavgat and Akseki districts of the southern Antalya province, with aerial and ground operations underway.

Fires in Manavgat had first emerged on Wednesday at four different points around noon, whereas the fire in Akseki emerged late Friday.

The wind blowing hard at some locations has made it hard to put out the fires, while settlements are at risk.

The aerial elements have begun to operate once again in the early hours on Saturday.

Locals, in addition to the professionals, also contribute to the efforts to take the fires under control.

Volkan Hulur, the governor of Akseki district, said a great deal of effort was put to prevent fires from spreading to...