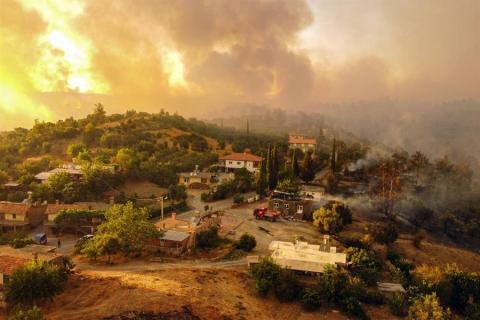 The US voiced its condolences on July 30 to Turkey as Ankara battles dozens of wildfires across the country that have so far claimed four lives.

"The United States understands how devastating wildfires can be for communities, and we offer our heartfelt condolences to the victims and families affected in Turkey," State Department spokesman Ned Price said on Twitter. "We stand with our NATO Ally and are ready to respond to requests for assistance."

Price retweeted a message posted Friday morning by the U.S. embassy in Turkey in which the diplomatic mission said it is "saddened about the fires devastating multiple regions in Turkey."

"We praise the courage and dedication of firefighters, aid workers, and citizens confronting the fires and extend our condolences to the families of victims and residents affected," the embassy said.

Officials from the EU and European countries also extended condolences to Turkey.

"We are deeply saddened by the forest fires that occurred in different parts of Turkey. We offer our condolences to those who lost their loved ones and wish strength to the teams which fight against the fires. The European Union share Turkey's sorrow," the EU delegation to Turkey said on Twitter.

"We are following the wildfires on Turkey's Mediterranean and Aegean coasts with great concern. I am conveying my condolences to all those who have lost their loved ones. We stand ready to help," Janez Lenarcic, European commissioner for crisis management, said on Twitter.

Serbian President Aleksandar Vucic conveyed his condolences to Turkish President Recep Tayyip Erdoğan for the victims who died due to the wildfires. Vucic said the Serbia is ready to help Turkey douse blazes and recover from the...