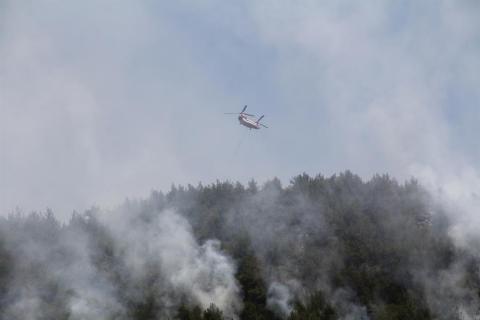 Ninety-eight of 107 forest fires in Turkey are under control, the nation's Agriculture and Forestry Minister said late on July 31.

Efforts to contain nine blazes are still ongoing, Bekir Pakdemirli said during a news conference at a fire management center in the Depirmenyanı district of southwestern Muğla province.

Pakdemirli warned that caution will be needed to combat the massive fires on Aug. 1 when humidity is expected to drop 10%.

He said three firefighting aircraft, nine helicopters, 146 water tenders, 20 water trucks and eight dozers are being used by 529 personnel to extinguish the blaze in Marmaris.

"As the head of an organization that planted 5.5 billion trees, we will plant 1 thousand trees in lieu of each tree burned when the first rains fall," he said.

Meanwhile, Turkey continues its efforts to extinguish forest fires in the Marmaris and Koycegiz districts of the coastal Muğla province.

The fire, which broke out in the forest area of ​​the Şirinyer neighborhood, spreads with the effect of the wind. It has since reached İçmeler, Turunç, Osmaniye, Bayır, Çiftlik, Turgut, Hisarönü and Orhaniye neighborhoods.

Nine helicopters and three planes were dispatched to the region to respond to the wildfires.

Speaking in Marmaris district as part of the visits to affected areas, President Recep Tayyip Erdoğan said teams from Muğla, other provinces, and Azerbaijan continue their work in the region.

Erdoğan said one of the fires in Marmaris was started by children, and that further investigations are underway. A suspect was detained in...