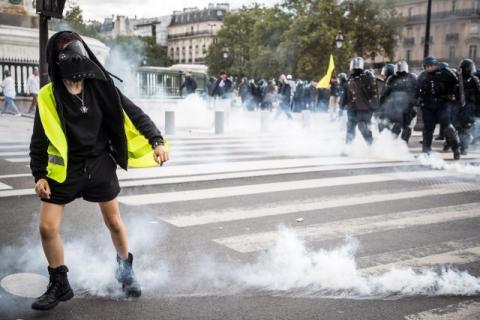 In France, there were protests in many cities, in Germany, the protest was concentrated in Berlin.
Demonstrations were held in Berlin organized by the German Querdenker COVID protest movement (a German word for non-linear, creative, "parallel" or "lateral" thinking).
The city authorities had banned these demonstrations, but despite that, about 5.000 people gathered on the streets of Berlin - exactly on the anniversary of the big demonstrations against the government's measures from 2020.
The Querdenker movement demands that the government unconditionally respect the German Basic Law and claims that the restriction of fundamental rights within the measures against the coronavirus is illegal.
The German government claims that the Kverdenker movement does not care about argumentative criticism of pandemic measures, but that it wants to destabilize the state.

A large number of police officers were on the streets in Berlin, partly with heavy equipment for breaking up demonstrations.
Protesters announced that they would adhere to hygienic measures such as keeping a distance and putting on masks in case the minimum distance cannot be maintained.

One of the reasons for the protesters' anger was the ban on these demonstrations after the Pride Parade - CSD - was held in the capital on July 24, with identical hygienic measures, which in some situations could not be implemented 100%.
Opponents of the government's pandemic measures believe that the government in Germany, with the support of the big media, distinguishes between "good" and "bad", that is, desirable and undesirable demonstrations, and thus measures the situation with...