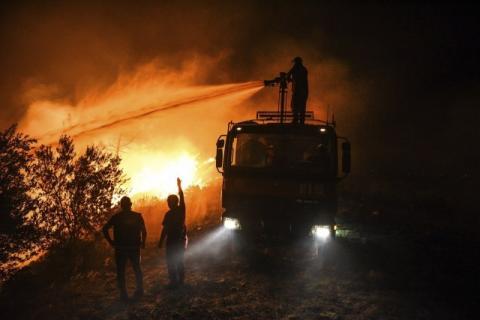 Firefighters are battling seven more fires.
More than 120 fires have been brought under control.
According to the world media, the firefighters are fighting for the fifth day to control the fire that continues to threaten the summer resorts.
Over the weekend, tourists, hotel staff and locals had to be evacuated by sea from the popular destinations of Bodrum and Marmaris, with the help of private boat owners.
Asked if she thought the fires were to blame for the great heat this year, a Marmaris resident said: "I don't know. It's different."

turkey is burning, people and animals are dying, houses are getting destroyed. They dont have enough fire fighting planes to stop it, so please lets help them and spread the knews around the world #helpturkey pic.twitter.com/PstCjjLNlW

"I have never seen anything like this before. There have been small fires before, but I have never seen destruction," she said.
Investigators are trying to determine if any of the fires were set.
Tourists are evacuated by boats.

Turkey is going through one of the most difficult periods in its history with dangerous fires that engulfed the entire country People and animals die while fighting fires Help our people and our brothers in Turkey #helpturkey pic.twitter.com/jex5Cp4dur

The cause of the fire is still being speculated. Turkish President Recep Tayyip Erdogan said one of the fires was caused by children.
The Turkish president visited some of the most endangered areas and declared a state of natural disaster in the affected areas, and promised help. He also addressed the...