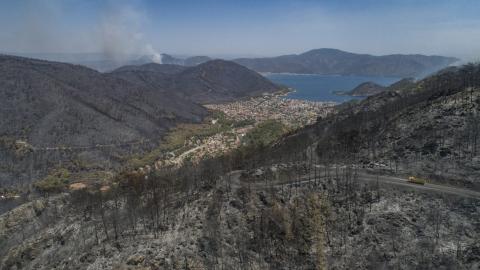 Turkish officials insist they are doing everything to stop the fires but the opposition and many ordinary people have criticized the government for its allegedly weak response.

"We are altogether fighting the forest fires in our country," the General Directorate of Forestry said on Sunday on Twitter.

The Directorate added that nine drones, 52 helicopters, three planes and 4,800 firefighters are battling to stop the devastating blazes.

President Recep Tayyip Erdogan on Friday conceded that Turkey does not have its own firefighting planes and accused the Turkish Aeronautical Association, THK, of not maintaining planes in good shape.

However, experts and former administrators of the THK insists that THK planes are operational and suitable for Turkey's landscape and blame the government for leaving the THK's planes lying around idly in hangars.

Turkey has meanwhile rented three firefighting planes from Russia. Ukraine, Azerbaijan and Iran have also sent their own planes and crews to help Turkish counterparts.

Turkey's neighbour Greece is also struggling with forest fires. So far, a dozen of homes burn and dozens of people are hospitalized.

Several settlements were evacuated and highways were closed as a precaution.

Wildfires plague Greece and Turkey every year during the hot and dry summer seasons.

The government on Sunday finally accepted the EU's help after four days of delay. Two planes from Spain and one from Croatia were due to arrive in Turkey on Monday.

"It is not acceptable to be caught unprepared by fires. This is...