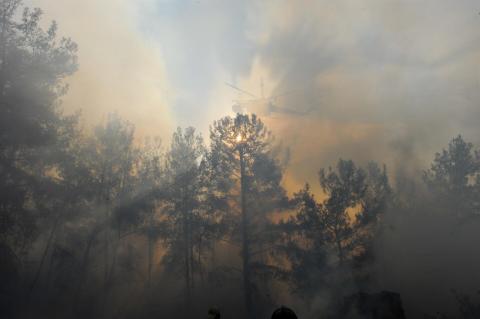 Firefighters were battling two large wildfires in Greece on Aug. 2, as the prime minister said the country was suffering its worst heatwave in more than three decades.

Fires have also raged across Turkey, Spain and Italy over the weekend with experts warning climate change was increasing both the frequency and intensity of such blazes.

More than 3,000 hectares (7,400 acres) of pine and olive groves have been torched by a fire that broke out on July 31 near the city of Patras, 200 kilometers (125 miles) west of Athens, according to the National Observatory of Athens citing EU satellite images.

And the authorities were rushing to bolster crews fighting a blaze on the island of Rhodes near Turkey.

"We are facing the worst heatwave since 1987," Prime Minister Kyriakos Mitsotakis said, adding that the authorities were doing "everything possible" to deal with the situation.

After meeting electricity providers, he warned that the brutal heat was putting a strain on the power network and asked for Greeks to limit their consumption in the early afternoon and during the night.

"We are no longer talking about climate change but about a climate threat," he told Star TV.

The fire near Patras was not fully under control on Aug. 2, the country's weather service told the ANA news agency.
And temperatures of up to 45 degrees Celsius (113 degrees Fahrenheit) have been forecast for nearby areas, posing new risks for land already parched by the heatwave.

Officials have evacuated five villages and a...