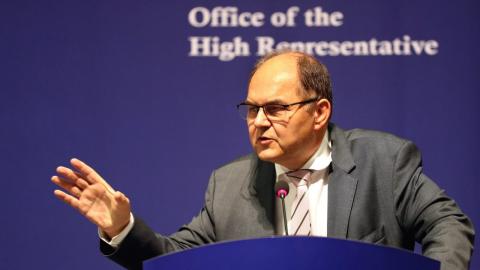 "There is absolutely no acceptable reason for glorifying convicted war criminals," the new High Representative to Bosnia and Herzegovina, Germany's Christian Schmidt, said.

He explained that many things needed to be understood when looking at the past.

"My understanding is such that I'm not here to bring my own narratives … it's necessary that we see history, we respect history, especially that we respect victims," the High Representative said.

"The last scene - where you see … children and young people belonging to all ethnic groups, we must ask ourselves what we are doing for them, and not say. 'I don't like this one, I like this one.' No. We are responsible," he said.

"I have chosen to come here because I feel accountable, especially as a German who knows that his country contributed to many bad things in this region in the last century," Schmidt said.

Commenting on the authority of the Office of the High Representative, OHR, which is hotly disputed in Bosnia and elsewhere, he said that it was up to him to manifest its legitimacy.

"I am not someone who is here for a journey or who has come here to drink coffee or wine, I am here to move certain things forward, which means I understand that task very seriously," he said, adding that one thing was very clear.

"Dayton and the Peace Agreement - I really give a recommendation to read those again. We are here to solve problems and I'm convinced that through meaningful discussions and things we can come to adequate results with all three representatives," he said, referring to the main communities of Bosniaks, Croats and Serbs.