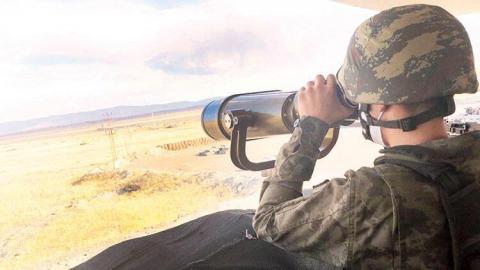 Turkish authorities have been reinforcing border security amid an increased risk of irregular migrant inflow from countries including Afghanistan, the interior minister said on Aug. 4.

Having successfully managed irregular migration from Syria and others parts of Middle East, Turkey also has a scenario for measures to be taken after the NATO withdrawal from Afghanistan, Süleyman Soylu said on Twitter.

Soylu outlined the measures the government has taken to reinforce border security such as building a 152 kilometer long wall on the Turkish-Iranian border, while work is underway for another 85 kilometers.

He said Turkey's 740 kilometer long eastern border will be watched by unmanned aerial vehicles (UAV) from the sky, and electro-optic towers and thermal night cameras on the ground.

He also highlighted that 90 percent of electro-optic towers and communication towers that play a key role in integrated border management have been completed.

Additional 500 village guards and 82 armored vehicles were also deployed to the border to boost security, he explained.

Afghans have for years been crossing from Iran into Turkey, many of them en route to Europe, but the number of detentions this month has raised concerns about a new influx.

Afghans are the second-largest migrant group after Syrians with between 300,000 and 500,000 people, according to estimates.