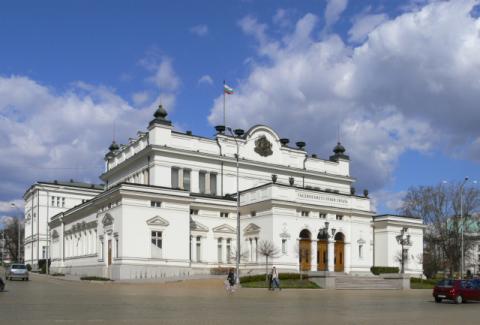 There Is Such a People (ITN) achieved complete understanding and substantial similarity on a number of sectors in their talks with Democratic Bulgaria, Rise Up BG!Here We Come! and BSP for Bulgaria. This transpired from a declaration of the TISP Parliamentary Group that its Deputy Floor Leader Filip Stanev read, addressing a plenary sitting of Bulgaria's Parliament on Wednesday.
Stanev said that his Parliamentary Group and the cabinet they propose expect support in the sectors on which consultations had
been held: justice, economy, finance, healthcare, social policy, education and agriculture.
"We concurred entirely on both the objectives set and on the ways of attaining them," the Deputy Floor Leader said.
Justice
The four parliamentary groups were fully agreed on an abolition of the specialized courts and prosecution offices, an
introduction of a working mechanism for the pre-term dismissal structural changes in the Supreme Judicial Council, a reform in
the prosecution service, and real e-justice.
Economy
The four parliamentary groups unanimously prioritize amending the Commerce Act so as to provide legal support to the various
stages in financing start-ups, tax incentives for small and medium-sized start-ups, removing barriers to making business and
providing an integrated digital environment for one-stop-shop services to individuals and businesses, regional decentralization, setting up regional economic zones and reducing market fragmentation by promoting competitiveness. There are also plans to support entrepreneurship and build an export-oriented economy and a detailed mapping of local
resources. A strategy will be drafted for the harmonious development and mobile connectivity of catching-up regions.