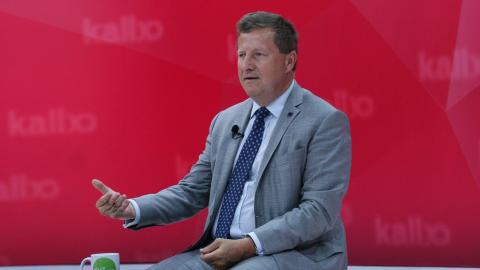 "The situation is not positive [and] I hope that it will be solved quite soon," he told BIRN in an interview.

Szunyog reiterated that the process led by the European Commission had concluded that Kosovo had met all of the conditions for visa-free travel into the EU's passport-free Schengen zone.

But the decision now rests with the European Council, which is made up of the foreign ministers of each of the 27 EU member states - and there is still no consensus in the Council on removing visa requirements for Kosovo citizens.

The Czech diplomat told BIRN that the Council makes decisions based not only on the European Commission's findings, but also on experts advising the 27 ministers.

"Some of those experts are not persuaded that the European Commission evaluation was done correctly," he said.

Szunyog denied that the visa liberalization issue was being used as a "carrot" in the EU-led Kosovo-Serbia dialogue, describing the two as completely separate processes. He added that Kosovo needs to continue to focus on the criteria set out by the European Commission.

"Some of those criteria remain and require constant attention," Szunyog told BIRN.

"Let's say those criteria are a track record on fighting organised crime and corruption. This is something which is not just one thing fulfilled five years ago. This needs constant attention."

'No excuses' over Serb Municipalities' Association

The EU ambassador refused to predict when visa liberalisation may be granted, but stated that a positive...