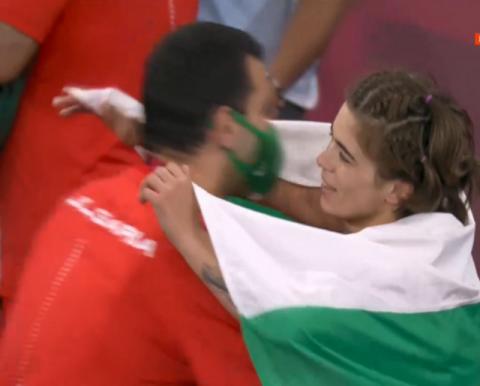 Taibe Ussein won a bronze medal in women wrestling at the Tokyo 2020 Olympics.

The Bulgarian performed extremely well and won against the Russian Lyubov Ovcharova in the match for third place in the category up to 62 kg.

Taibe Ussein could barely contain her emotions after the victory over the Russian Lyubov Ovcharova, which brought her the bronze medal in the category up to 62 kg at the Olympic Games in Tokyo.

It took only 56 seconds for the Bulgarian wrestler to beat her rival, whose coach is also Bulgarian - Simeon Shterev.

"I'm very happy. I still can't realize what I've achieved. My instructions were to punish every mistake of my opponent, because I didn't know if it would reach others. I did everything I could so far (in Tokyo). To be alive and well and whatever is written will happen (on the way to Paris 2024), " Ussein told BNT.