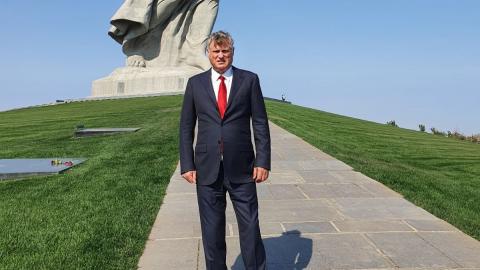 Lazanski was appointed ambassador to Moscow in June 2019. He had been an MP in parliament since June 2016, elected on the ruling Serbian Progressive Party's list as a non-party person.

Speaking on N1 Television before the 2016 election, Lazanski said that Aleksandar Vucic, then Serbian Prime Minister, now President, had not asked anything from him.

"Vucic did not ask for anything concrete, but considering my career, knowledge and connections and contacts that I have, he saw that I could help the state, the defence system and, in the end, him as well," Lazanski told N1.

Lazanski was a well-known military journalist and commentator since socialist Yugoslav times. Born in Karlovac in Croatia in 1950, he graduated from the Faculty of Law in Zagreb.

He started his career at Polet magazine in Zagreb, and later wrote for Vjesnik, Danas and Start. From Zagreb, he also wrote for Politika ekspres and NIN weekly magazine.

He started to write for Politika in Belgrade in 1991, five years later he moved to Vecernje novosti and then in 2001 he returned back to Politika.

Children soldiers - "time bomb": They brainwash them, then send them to the front
Romania updates list of countries in COVID-19 red, yellow, green areas