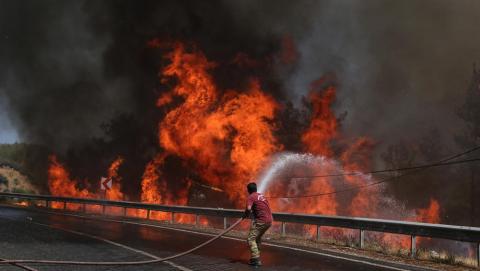 Balkan countries are battling wildfires that have claimed eight lives in Turkey and injured hundreds more, while one person died in Albania and a military officer been injured.

Fires have destroyed land, forests, houses and tourist accommodation in Greece and Turkey. Villages and neighbourhoods have been evacuated in Turkey, Greece and Albania.

After some of the affected countries turned to the EU for help in managing the fires, the EU's Civil Protection Mechanism sent two helicopters to Albania and a firefighting team with 45 firefighters to North Macedonia and four air tractors and a ground forest fighting team of 40 firefighters to Greece.

Commissioner for Crisis Management Janez Lenarčič said: "We are working around the clock to send help as fires rage across Europe. I thank Cyprus, Czechia, France, Slovenia and the Netherlands for swiftly deploying firefighting airplanes, helicopters and a team of firefighters to support countries heavily affected by forest fires.

"At this time, as several Mediterranean countries are facing fires, the EU Civil Protection is making sure that our firefighting tools in place are used at maximum capacity. This is an excellent example of EU solidarity in times of need," he added.

Wildfires have continued to rage in south and southwestern regions of Turkey since the last week, and about 11 are still out of control in six provinces.

Eight people have died, hundreds more have been injured and dozens of settlements were completely destroyed. Several others were evacuated on Tuesday night, including Soke municipality in Aydin province, where blazes threatened a coal-fired power plant, risking an explosion.

In Greece, wildfires have burned everything in their path from Varibobi north of...