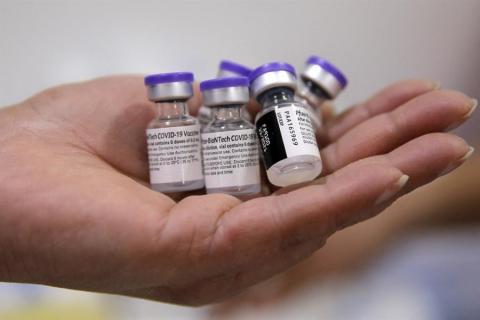 After a four-day disruption, the deliveries of BioNTech vaccines have resumed and will help the jab drive regain its momentum, Health Minister Fahrettin Koca has said.

Due to production-related problems, the deliveries declined between July 31 and Aug. 3, Koca said in a statement following a meeting of the Health Ministry's Science Board, noting that the new batches of the jab started arriving.

"With the arrival of the jabs, the vaccination drive will return to its regular speed by Friday [Aug. 6]," he said.

Turkey will receive a total of 13 million doses of the vaccine by Aug. 9, the minister added.

In an interview, Koca noted that 1.3 million doses of the BioNTech were delivered on the night of Aug. 3, with more 10 million doses expected by the end of the week.

Turkey was supposed to receive 60 million doses of the jab by the end of July but only 40 million doses were delivered, the minister said, adding that he does not expect such problems in the future.

Koca also warned on Twitter that the daily infections are well above the 20,000-threshold, calling on the public to get vaccinated and stay away from crowds.

In the interview, the minister said that cases have been on the rise because of the increased mobility between provinces and people's complacent attitude.

"It will be possible to say only next week when this new peak in the cases will end," he added.

The minister also said that officials are discussing whether people should be asked to provide PCR test results to travel on planes and buses or enter movie theaters and theaters.

Meanwhile, customers who have not received two doses of the coronavirus vaccine will not be allowed into coffeehouses,...