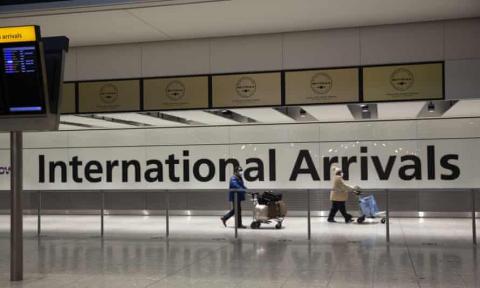 The U.K. government said late on Aug. 4 it will ease English entry rules requiring arrivals from France to quarantine even if they are fully vaccinated, following its latest review of travel curbs, but has kept Turkey in the red list.

The change-- which will come into effect at 4:00 am (0300 GMT) on Sunday - puts France back on England's so-called "amber" list of countries under its traffic light system for arriving travellers.

The government last month eased the rules to allow people from amber countries fully jabbed with a vaccine approved by regulators in the United States and European Union to enter without having to self-isolate.

However, arrivals from France were the exception.

Britain said it acted over fears about the prevalence of the Beta strain, even though it mainly affected France's overseas territories, particularly La Reunion.

But furious officials in Paris called the move "discriminatory".

France now rejoins dozens of other countries on the amber list - including many EU members and the US - which mandates virus tests before and after arrival for those jabbed in those territories.

Others must self-isolate at home for 10 days.

India, Bahrain, Qatar and the UAE will be moved to amber after being on the red list, which requires a costly 10-day hotel quarantine on arrival.

Turkey has remained in the red list as thousands of Turks living in the country has expected to be moved to the amber list.

Other changes to the rules - which are reviewed every three weeks - will see Austria, Germany, Slovenia, Slovakia, Latvia, Romania and Norway added to the green list.

Travellers in that designation must only take Covid-19 tests before and after entering England,...