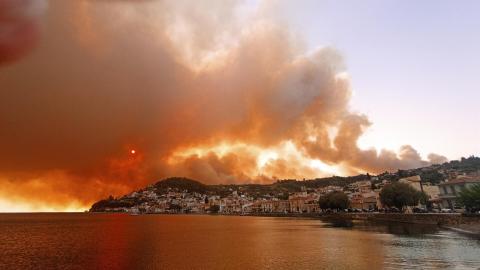 At least 150 houses were destroyed by a raging fire that surrounded a monastery and a dozen villages on the Greek island of Evia on Aug. 4, one of over 100 blazes burning in the country.

Firefighters were also battling a blaze near Athens, while the mayor of Olympia, the birthplace of the Olympic Games, pleaded for help as flames threatened the site.

The blazes erupted as Greece is in the grip of a heatwave.

"We're waging a battle of the titans!" deputy minister for civil protection Nikos Hardalias told journalists. "The hardest is still to come."

On Evia, the huge flames leaping up from the forest could be seen from the sea. Firefighters said it was a difficult blaze to control on an island of rolling hills with little visibility.

Three monks from Saint David Monastery had refused to leave, they added, but everyone had been evacuated from nearby villages.

"We're suffocating due to the smoke," one of the monks told the ANA news agency by phone, describing flames of 30 to 40 metres (100 to 130 feet) high surrounding the monastery.

Police told AFP they would force the monks to evacuate if their lives were in danger. Around 85 people gathered on a beach were evacuated on five boats.

But local politicians denounced the lack of resources.

"We are asking the authorities to reinforce the air and land forces to so as not to risk human lives," Giorgos Tsapourniotis, the mayor of Limni, told ANA news agency.

And Argyris Liaskos, deputy mayor of Mantoudiou told Skai TV that no air support had been deployed there to tackle the fires. "At least 150...